Plus: prices, store layout descriptions, and more info you might find useful when crafting your Ikea battle plan. Photo by JL JAVIER

Like the rest of the population in a work from home set-up in the time of a pandemic, I’ve been living the hermit life from the confines of my bedroom for the past year and a half, only going out of its general vicinity for essential errands such as bank runs and other similar activities. This hasn’t changed even in the past few weeks under Alert Level 2 (which states that commercial establishments are permitted to operate at a maximum of 50% capacity).

Venturing outside is a whole event in itself that involves me dressing up, putting on makeup, and ditching my slippers for shoes. Shoes! So when I finally made a trip out of my room, the irony was not lost on the fact that I found myself in… another bedroom. Or rather, bedrooms. In one of them, two large windows flanked a queen-sized bed that an interior designer said was designed “for an old couple whose kids have left the nest.” Nearby, another, much smaller space was set up with a crib next to a closet, which they said was designed with “an OFW father with a baby” in mind. And in another, white double decker beds and walls adorned with butterfly and cloud lamps: “a child’s room, specifically for twin sisters.”

These were just some of the many showroom spaces at the new Ikea store in Pasay City designed to cater to the living situation of different kinds of Filipino families. The buzz surrounding this particular store has been high ever since the Swedish furniture manufacturer’s announced their entry into the Philippine market in 2018. How fitting that my journey outside was for a tour of the furniture giant’s sprawling four-level building located right next to Mall of Asia Arena (also the venue of some of my favorite pre-pandemic memories from 2019).

The showroom spaces at the new Ikea store in Pasay City are designed to cater to the living situation of different kinds of Filipino families. Photo by JL JAVIER

Prior to my visit, Ikea struck me as another foreign megastore in the vein of H&M or Costco — one you’d look forward to visiting when in another country, but maybe not really care as much for when it’s already in your home court. I also knew that the company follows a “philosophy of democratic design,” a concept centered around Ikea products that combines function, form, quality, sustainability, and low price so "everyone can live better lives.”

But the bulk of my Ikea store knowledge really came from watching Zooey Deschanel and Joseph Gordon Levitt’s short married couple roleplay in “500 Days of Summer.” That, and a video I used to replay a lot during the early days of quarantine — a 14-minute vlog of two members of K-pop boy group NCT visiting one of the brand’s three stores in Seoul, South Korea.

“I’m here to buy a lamp,” says NCT member Johnny in the video, face illuminated by the brightly-lit yellow IKEA sign in the store’s parking lot. He and another member, Jaehyun, seemed to make a whole day out of their visit to the store, starting with a coffee run at its Swedish Cafe before continuing into a tour of its showrooms (where they goofed off with the many different displays). By the end of the vlog, the two walked out with a variety of items, including a TrådfriI smart lightbulb, a Trofast wall storage shelf, and a stuffed orangutan. And in a classic Ikea shopper tale, the aforementioned lamp was not part of the haul.

The Ikea store layout consists of 27 sections starting from the Living Room showroom and ending at the Swedish Cafe. Photo by JL JAVIER

Overwhelming shoppers might as well be part of the Ikea ethos. What else would you expect from a place that’s designed for “instant gratification?” The store layout is even designed to allow you to take home a piece of furniture on the same day you visit, provided that it’s in stock.

Eye-kee-yah or “Eee-KEH-Yah,” if you prefer the Swedish pronunciation (another fact I learned from said K-pop idol vlog. Thank you, Johnny.) had about 445 stores worldwide at the end of August 2020. The new IKEA store in Pasay City is the largest in the world at 65,000 square meters — around 9,000 sqm bigger than Seoul’s Gwangmyeong store, which previously held that title.

With 27 sections starting from the Living Room showroom and ending at the Swedish Cafe, the store layout is quite straightforward — if you want to play it safe, all you have to do is follow the white arrows on the floor to take you from entrance to exit. This is nearly identical to other IKEA stores around the world, which gives those who’ve set foot in other stores an edge.

All you have to do is follow the white arrows on the floor to take you from entrance to exit. Photo by JL JAVIER

A cousin once told me that she and her mom prepared for their trip to a nearby Ikea with a spreadsheet filled with product names and photos they thought would fit her college dorm, only to throw that all out once they stepped foot in the store. “Isn’t that a bit much?” was my initial thought upon hearing that story, but I immediately understood by the time we ended the Pasay store tour which took three hours (give or take). And that was without shopping. It was no joke going from 500 to 5,048 steps in a space rumored to be the size of 150 basketball courts — I highly advise going in with a battle plan to make the most out of your scheduled booking, as walk-ins are not allowed.

The Ikea entrance leads to the showroom section on the fourth floor consisting of the living room, workspace, dining, kitchen, bathroom, and bedroom sections, and ending in a dedicated children’s section which features a jungle-inspired play area that’s still closed due to COVID-19 safety protocols. The market hall on the third floor has more of the smaller items — from tableware, mirrors, and lighting, to bathroom accessories and home organizers, the famed “Everything under ₱100” section, as well as a whole section for plants (both artificial and real, with the latter available later in the year, and locally sourced).

Ikea partnered with local social enterprise Rags2Riches for their textile services. At the store, you can choose from the wide array of Ikea textiles available, which Rags2Riches artisans can sew into custom-made products. Photo by GABY GLORIA

The main concern of many was that local taxes would drive up prices, similar to other global franchises that made their way here in the past. Store general manager Georg Platzer was previously quoted as saying that they “would like many people to afford [Ikea in the Philippines].” “It doesn’t necessarily mean that they have [to have] big money and big wallets,” he said at the media launch in 2018.

I also spotted some Ikea classics that I previously encountered on online pasabuy spaces last year while upgrading my desk area, such as the Vittsjö laptop table (₱1,190) and the Poäng modern armchair (₱4,290 for the set, inclusive of both the frame and cushion), and Långfjäll computer chair (₱6,990). These prices weren’t so bad, considering the numerous “Scandinavian-inspired” knock-offs I found on e-commerce platforms that were double the price but shipped from China.

There’s no official word yet on whether or not the brand is cooking anything up with any local designers or furniture makers, but for now they have partnered with local social enterprise Rags2Riches for their textile services. At the store, you can choose from the wide array of Ikea textiles available, and Rags2Riches artisans can sew custom-made cushion covers (starting at ₱150 per piece), sofa covers (starting at ₱1,500 for armchairs), tote bags (starting from ₱200) and curtains (starting from ₱350). They can also adjust sizing, and personalize other fabric-based materials like towels and bedsheets.

The food is a whole other story and a fitting way to end a tour of the space. Sections 10, 26, and 27 are for the Swedish Restaurant, Food Market, Bistro, and Cafe, where you can find the iconic Swedish Meatballs (starting at ₱159 for eight pieces at the Restaurant, and ₱599 for 1 kg of the frozen option at the Food Market), Crunchy Almond Chocolate Cake (₱89), and Hotdogs (₱29 at the Bistro).

You can find the iconic Ikea Swedish Meatballs (starting at ₱159 for eight pieces) at the Swedish Restaurant. Photo by JL JAVIER

I exited the store empty-handed, but not without a phone gallery of photos and videos of items I wanted to go back for (orangutan and shark plushie included). Standing in the elevator waiting and wondering if I pressed the right button that would take me to street level, I scrolled through the photos and made a mental note to check for the items on the website at home, NCT Johnny’s quip of “Is it just me or do people always get lost in IKEAs?” echoing in my brain.

View more photos of the store below: 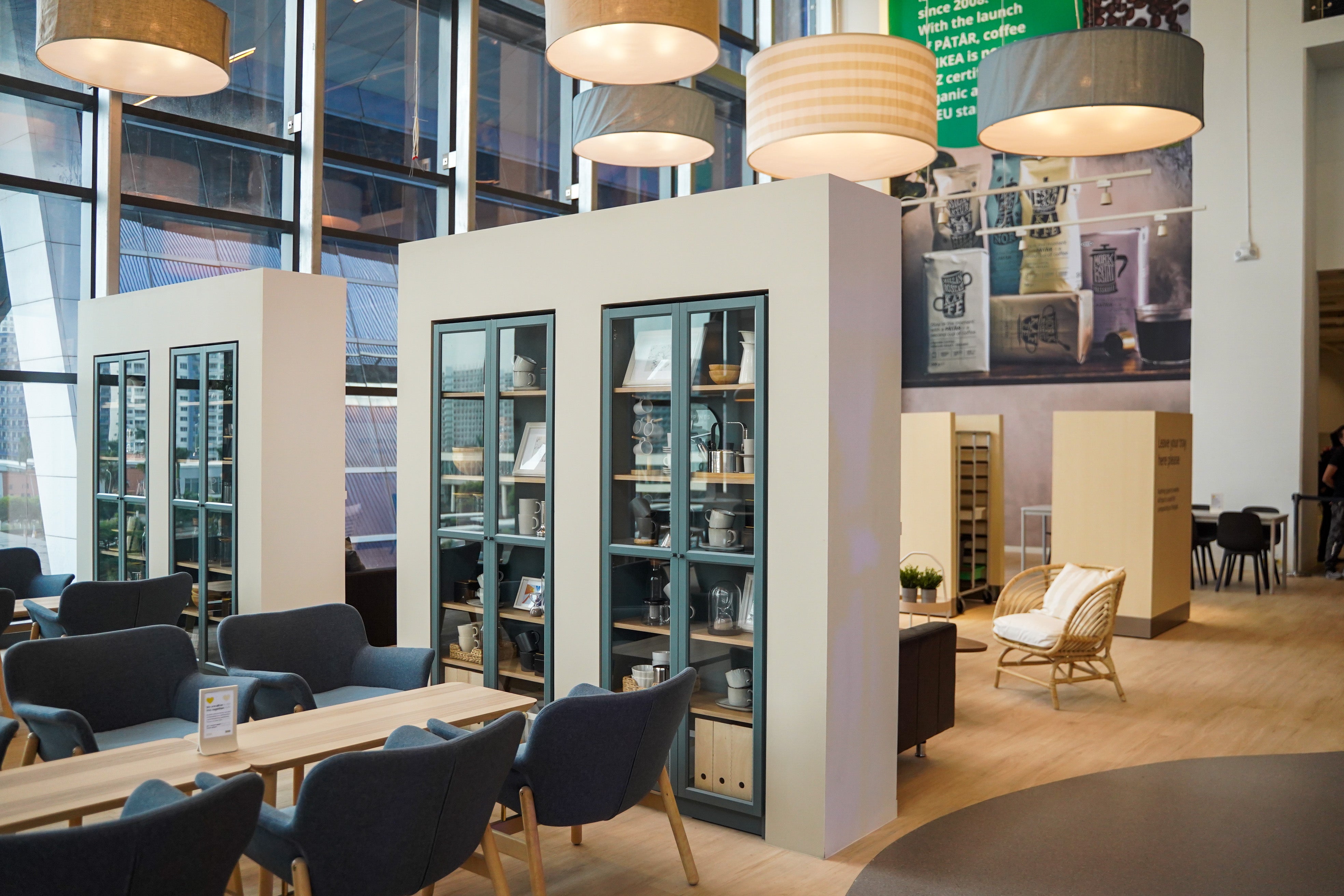 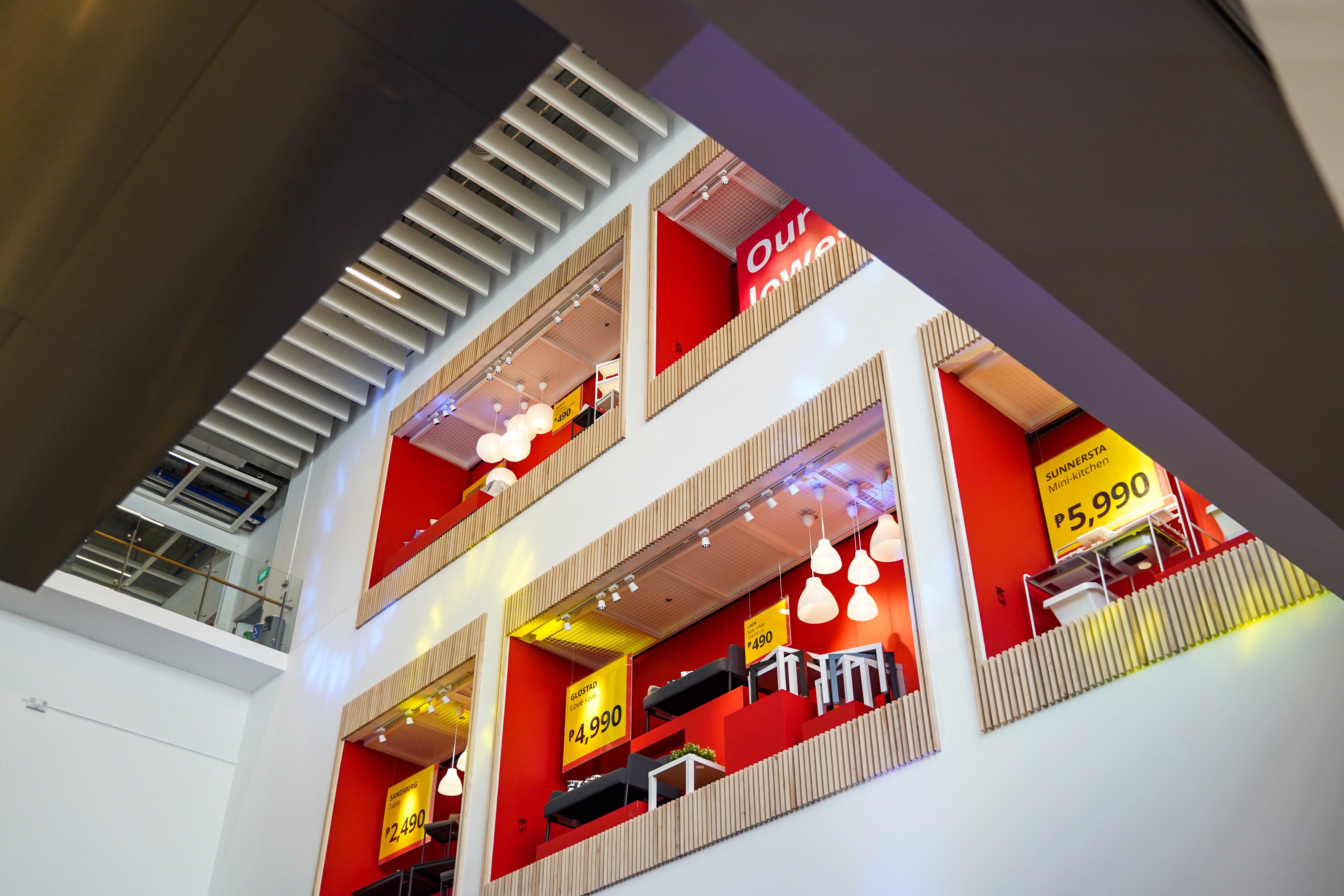 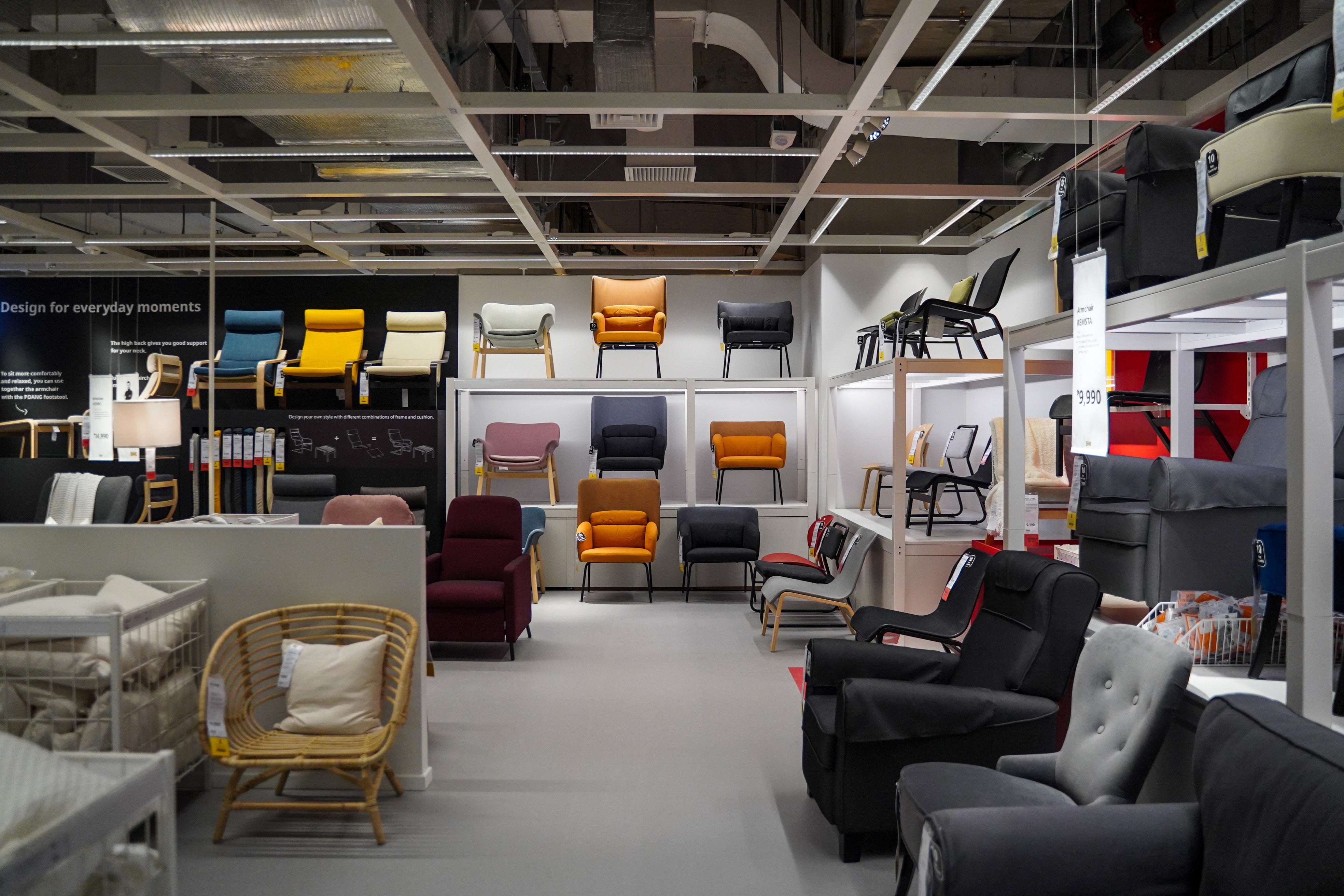 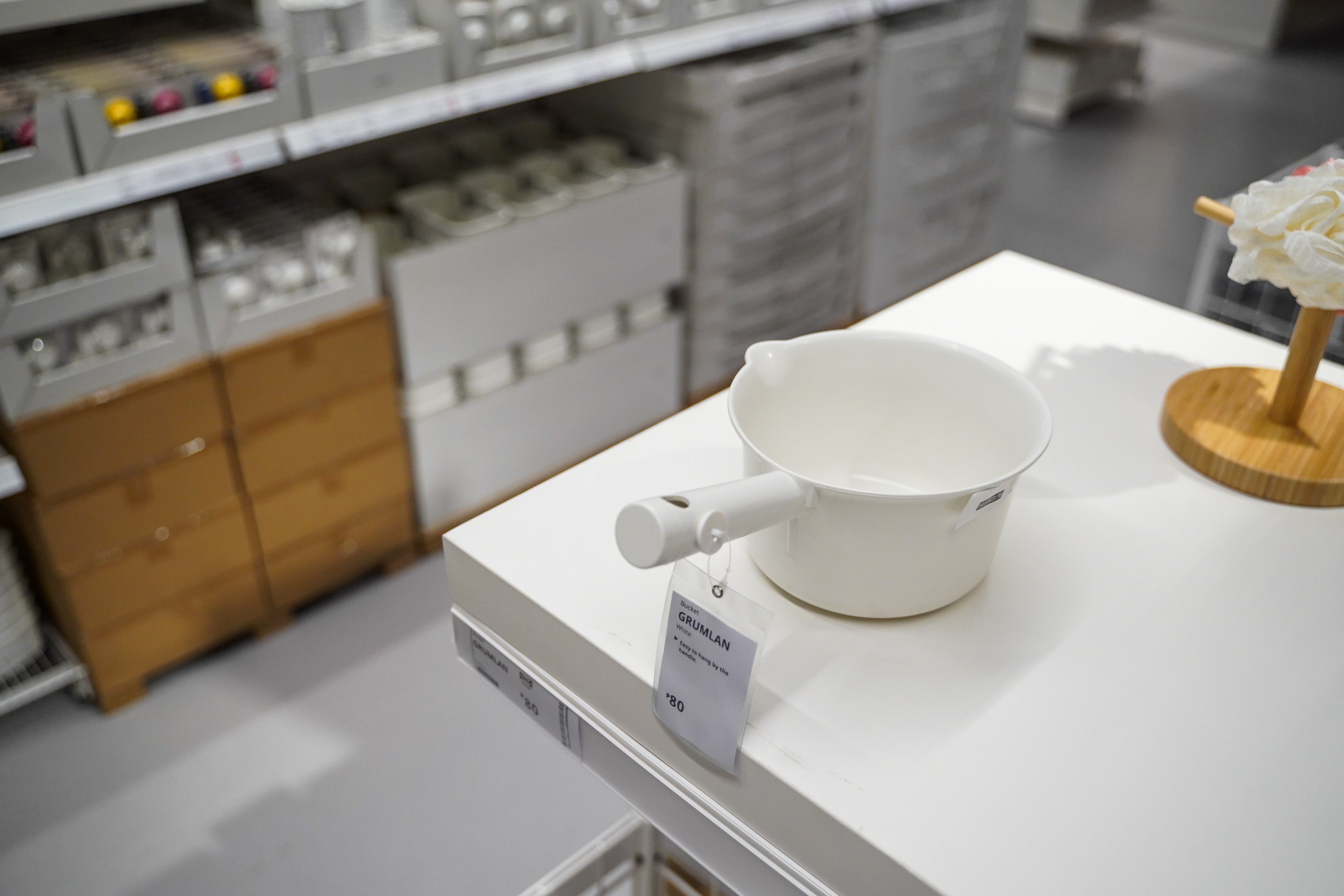 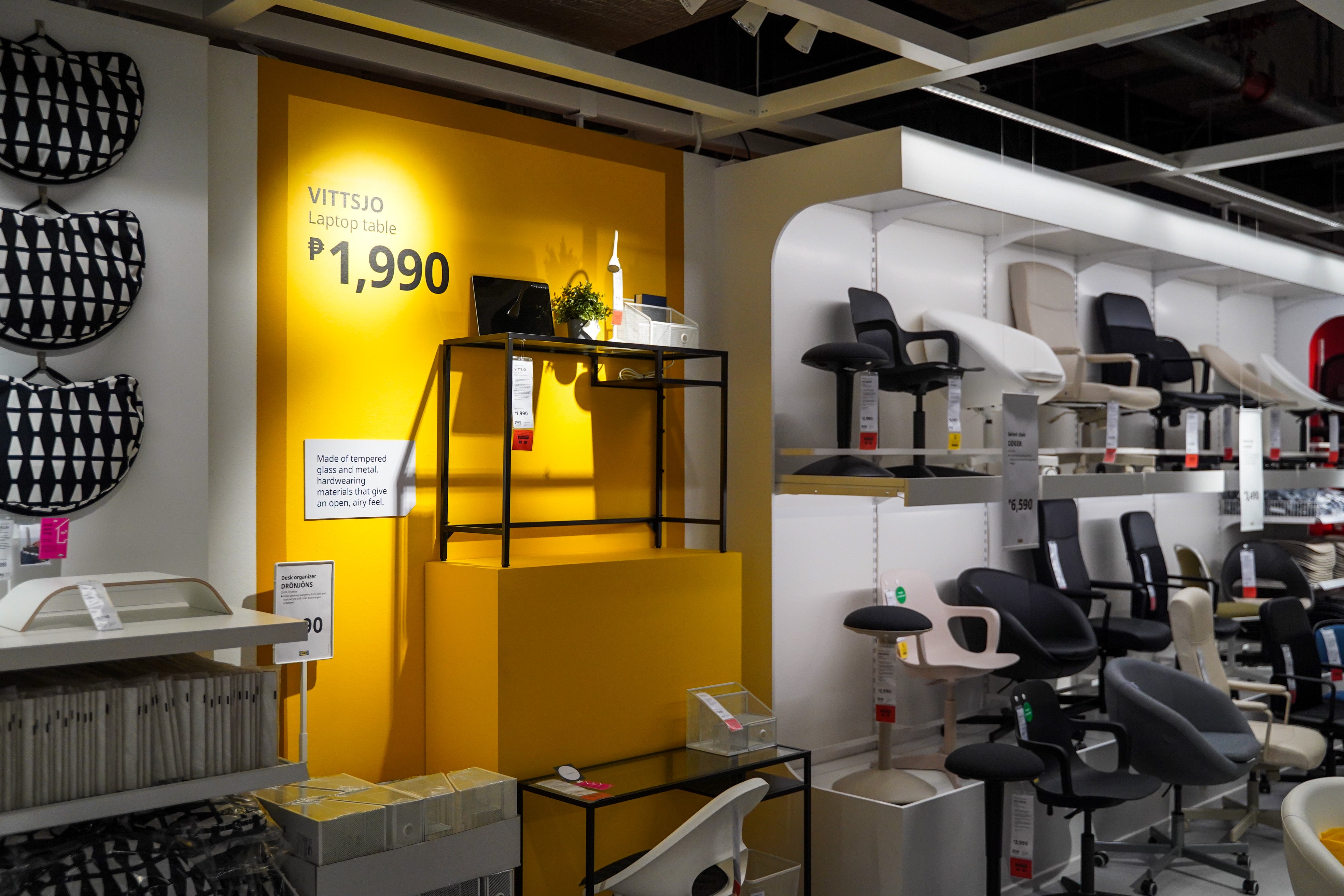 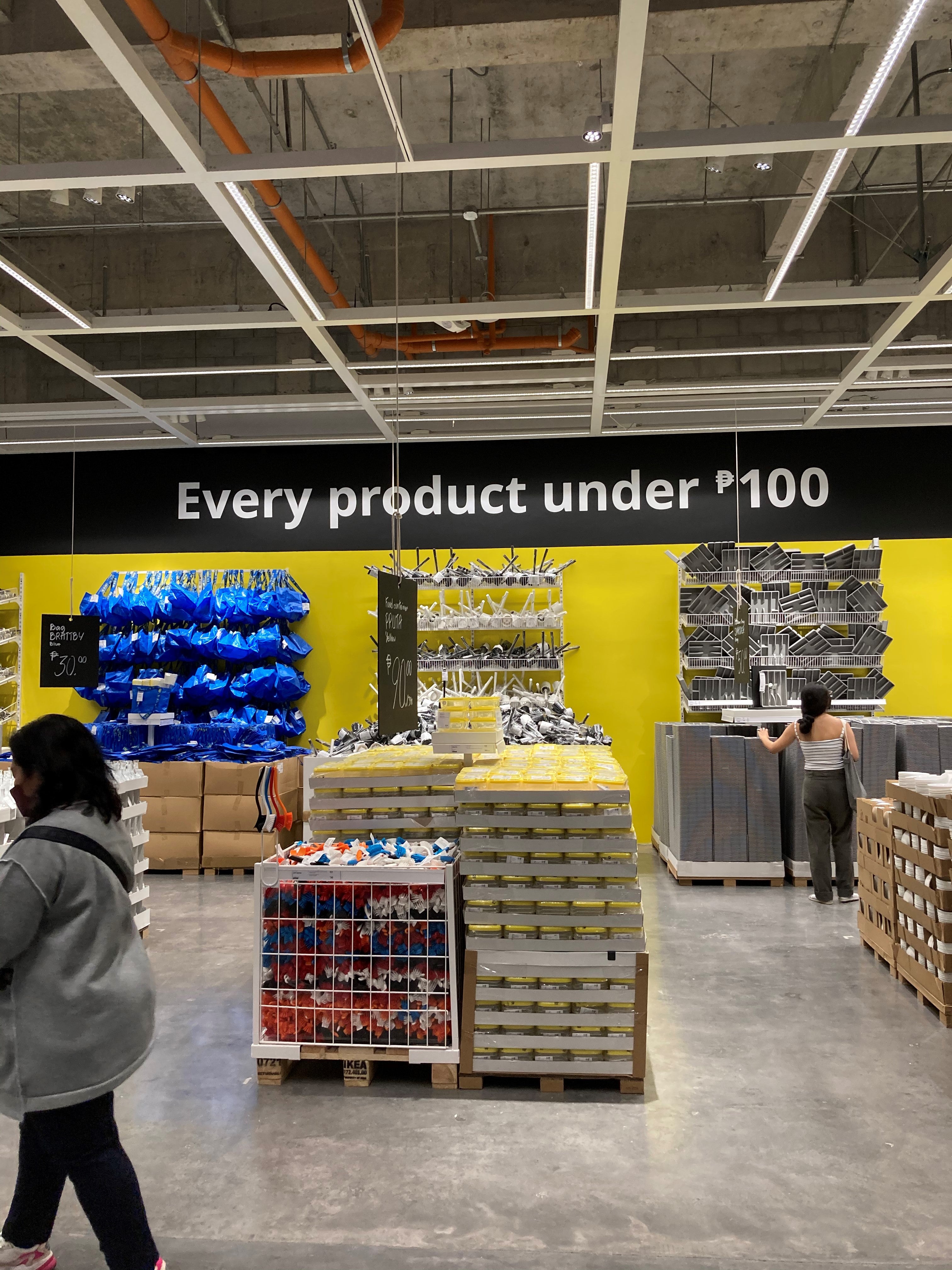 Ikea is located at the Mall of Asia Complex, J.W. Diokno Blvd, Pasay City. Walk-ins are still not allowed, so those interested to pay a visit need to book their visit through the Ikea website.